Justice for Samuel Wazizi, a Cameroonian journalist who died while in detention

Telling Cameroonians that Samuel Wazizi died of Severe Sepsis since 17 August 2019 should be coming along with the reason his case was going on in Fako High Court without the administration notifying the lawyers of his death? If he died of sickness did the government not notify the public when we were demanding his release? Is his body still in the keeping since August 2019?

It is worthy to note that Samuel Ajiekah Abuwe popularly known as “Samuel Wazizi” was arrested on the 2nd of August 2019 in Muea-Buea, Southwest Region Cameroon, and according to report from the government authorities he died on the 17th of August 2019 as a result of Severe Sepsis. Since then, the case of Samuel Wazizi was going on in Fako High Court in Buea till early June 2020. Samuel Wazizi was a journalist with CMTV in Cameroon before being arrested and charged for terrorism 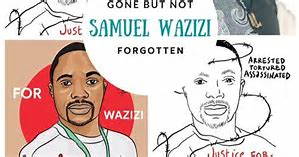 Human Rights and Legal Research Centre (HRLC) joins the voices of millions of persons both nationally and internationally to say #JusticeForSamuelWazizi, Justice for all journalists in Cameroon